Auction is a Hit! 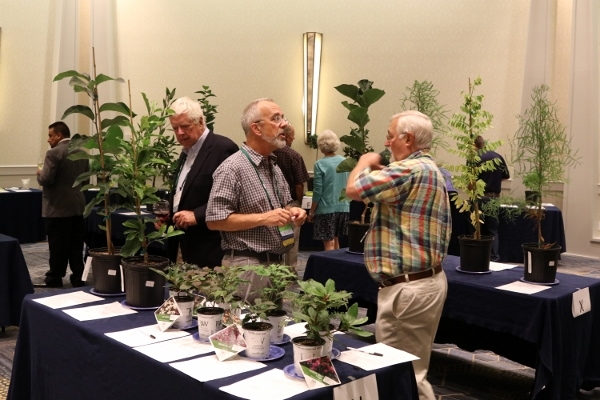 Of the many aspects of the IPPS conference each year that highlight the comradery and generous nature exemplified by the organization few are as spirited and lively as the annual silent and live auctions.

Roughly 140 unique items made an appearance at this year’s auction. Everything from live plants, to local wines and spirits, to books, to a set of hand crafted knives were on display, donated by around one hundred different individual members or organizations. The silent auction brought in $4,906 dollars for the organization and sent many folks off with beautiful plants or items to bring back home with them.

However, the live auction was where things really got energetic this year. Organized by Bob Gaucher and Emanuel Sanchez from Prides Corner Farms and auctioneered by local radio superstar Len Giddix, also of Prides; the auction brought in $2,450 from a handful of unique items. Some of the items included: two sets of New England Patriots tickets, two different discount packages for lovely New England weekend getaway locations, several magnificent and rare live plants, and a very interesting corpse flower corm.

The biggest ticket item wound up being a bottle of Asyla Scotch which went for $550 dollars after an intense bidding war. The award for most spirited bidding war definitely goes to an impromptu back and forth which brought in $250 dollars just to stop Len from telling a series of increasingly groan-worthy “You might be a New England Gardener if…” jokes!

Of course, no auction would be complete without the highly coveted “Shirt off Tim Brotzman’s Back” which brought in $125 from Mike Gates to close out the bidding for the evening.

An enormous thank you to the organizers of the event, the numerous contributors who provided items for the auctions and all of the members who generously opened their wallets to the tune of $7,356 raised between both auctions which will go to support the Eastern Region as well as the Eastern Region Foundation which supports student scholarships and research projects with its growing endowment.