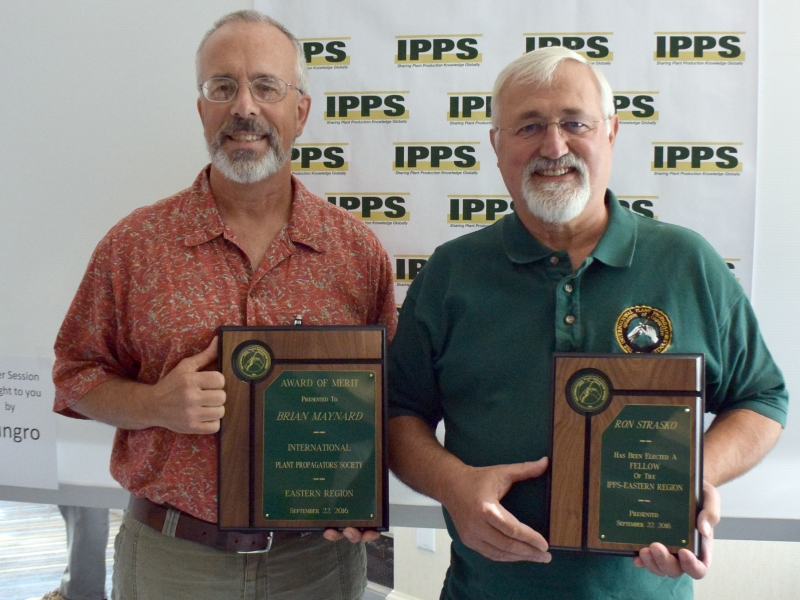 Before a crowd of about 150 people, IPPS Eastern Region presented the Fellow Award and the Award of Merit to two very deserving members. The Nominating and Recognition Committee ranked the many nominees based on qualifications and the winners determined by highest scores. It is a longstanding tradition in the Eastern Region to gradually reveal the winners with successively easy clues, helping to build some buzz at the annual conference. The recipients are usually as surprised as everyone in the room, and that was the case this year.

The 2016 Recipient of the Award of Merit is Brian Maynard. Brian has been a professor of horticulture at University of Rhode Island since 1992 and an IPPS Eastern Region member since 1986. He is no stranger to IPPS awards, having received the IPPS Research Award in 1992 and having been named a Fellow of the Eastern Region in 2003. He chaired the Local Site Committee for the 1997 and 2010 Eastern Region conferences and has served on 10 other IPPS committees. Brian has published over 20 papers in the IPPS Proceedings on subjects such as old stock plants for cuttings; subirrigation on rhododendrons & stockplant etioliation. Brian is the Program Chair for Eastern Region’s 2017 Conference in Grand Rapids, Michigan. He is boldly going where no member has ever gone before. . .. having served previously as Eastern Region IPPS President, Brian is back on the Eastern Region Board again!

Following the presentation of the Award of Merit plaque by Recognition Committee Chair Peggy Walsh Craig, Brian remarked “All I can think of is Lenny Savella and how getting this award was his proudest moment. I want to thank Nina Bassuk and Ken Mudge for being my mentors and Bill Barnes, Jack Alexander and Dick Bir for making me feel welcome to IPPS. Thank you!”

The Fellow Award was created to acknowledge outstanding members of the IPPS, Eastern Region, who have contributed to the advancement of the Society and to the field of plant propagation and production. This recognition is for contributions to the IPPS through participation, service, leadership, research, teaching or extension work. Only active members with at least 10 years of membership are eligible.

The 2016 Recipient of the Fellow Award is Ron Strasko. Ron founded Creek Hill Nursery in Leola, PA in 1990, and has pioneered the use of modular systems for live roof installations. Creek Hill Nursery was a finalist for Operation of the Year from Greenhouse Grower magazine in 2014. Ron has published in the IPPS Proceedings on ornamental grasses & on tip cuttings and has three plant patents for ornamental grasses. His service to IPPS includes the 2012 Local Site Committee, Chairing the Area Meeting Committee in 2005 plus two terms on the Long Range Planning Committee. Ron has been an IPPS Eastern Region member since 1987 and served as a Director to the Eastern Region Board from 2003-05. He is currently the Second Vice President on the Board of Directors. Friends John Friel and Dale Hendricks, when asked to provide input for the award presentation, said Ron is a very generous man and very knowledgeable grower who does some of the watering on weekends in his operation, even though he's the boss! Ron stated “I’ve seen a lot a people get this award over the years and I can’t believe I’m receiving it now.”