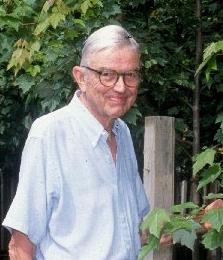 A third generation nurseryman, William (Bill) Flemer grew up in the Princeton, NJ area. He began his college career in 1942 attending Yale University, where he earned both a Bachelor of Arts degree and a Masters Degree in botany. His college studies were postponed during World War II when he served in the 603rd Engineer Camouflage Battalion. After service, he returned home to complete his education and enter the family business – Princeton Nurseries.

Bill was named Vice President of Princeton Nurseries in 1950. In 1972 he became President of the nursery, a position he held for 20 years.

He served as Chairman of the U.S. National Arboretum Advisory Board and was for 6 years a member of the Arnold Arboretum Visiting Committee. He also served on the White House Grounds Committee in Washington D.C.

Bill has willingly shared his knowledge and experience with the industry over the years by publishing numerous articles and several books on trees and shrubs. He has been a member of IPPS since 1952 (a year after it was founded) and has presented papers on a wide range of subjects.

His extensive knowledge of plants and his tireless efforts to improve existing species led to the development of many trees and shrubs. To date Bill is credited with 62 plant introductions.

Bill Flemer has spent a life time seeking and sharing, not only within IPPS, but within the nursery industry

*A very special thanks goes to Alan Jones for the research and information on William Flemer III.