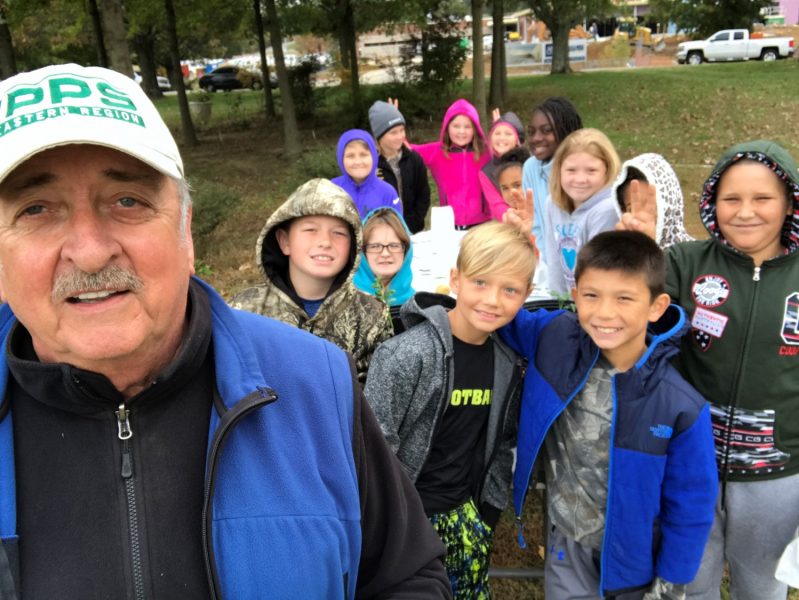 Win leading a horticultural program for 4th and 5th graders at UKREC.

Win Dunwell was elected Eastern Region President at the 2019 Eastern Region annual meeting in Madison, Wisconsin in October. He attended meetings of the eastern and southern region as a college student and a non-member. He became a member of the southern region initially but was convinced by Bob McNiel that he could save funds by traveling with him and Bob Geneve to Eastern Region meetings! Win says, “The rest is history; a joyful learning experience from so many ‘seek and share’ IPPS members on tours, at conferences and visiting members places of business.”

Win grew up working in the landscape/nursery industry with Carter Landscape/Evergreen Nursery in East Quogue, NY working on “Hamptons” estates. Following other jobs in the industry and completion of his Associates Degree at State University of New York at Farmingdale, he joined the U.S. Air Force in 1968. Upon discharge in 1972 Win attended the University of Wyoming for his bachelor’s degree and then completed his Ph.D. under the guidance of his major professor, Dr. Art Boe, at the University of Idaho. Win is currently an Extension Professor of Horticulture for nursery crops at the University of Kentucky Research and Education Center (UKREC) in Princeton, KY

Win has been an Eastern Region IPPS Member since 1998 (transferred from Southern Region). He has presented (or co-authored) papers in both regions. He has served the ER-IPPS as an Officer and Director on the Board of Directors and on multiple committees over the years.As First Vice President, he was the Program Chair for the 2019 Conference in Madison, Wisconsin.

Win says that “being a member of the International Plant Propagators’ Society has greatly enhanced my professional and personal life and I am proud to serve IPPS in any way I can. I think I speak for many members. The youth of today are the future of IPPS, and I plan to share the joys of horticulture whenever I get the chance.”

Win and his wife, Jan, live in Kuttawa, KY and travel to the far reaches to visit their 4 children and 10 grandchildren.