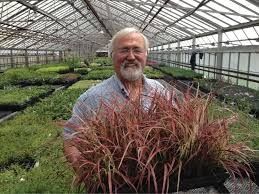 Ron Strasko, owner of Creek Hill Nursery in Leola, Pennsylvania was elected President of the IPPS-Eastern Region during the annual general meeting held on September 25th at the Newark, Delaware conference. A life-long gardener, Ron came to horticulture by a circuitous route; he received a BA in political science from Lynchburg College.

In 1977, he was hired as a salesperson by Greenleaf Enterprises in Leola, PA. He soon became interested in plant propagation on a large scale and started Creek Hill Nursery in 1992, propagating perennials, ornamental grasses and flowering shrubs. Today Creek Hill Nursery has over 60 employees and ships starter plants throughout North America.

In 1986 Dr. Darrell Apps introduced Ron and Dale Hendricks to their first IPPS meeting. Ron recalls that members got up and challenged the presenters. “There was real passion about all aspects of propagation. I’d like to bring back some of that passion and sharing of techniques and knowledge.” Ron was hooked and joined the society the following year.

He was a member of the long-range planning committee (1995 – 1997) and served as a director to the board from 2003 to 2006. He also served on 2 site committees (2012 and 2018). He again joined the board in 2016 as second vice-president. He was the program chair for the 2018 meeting in Newark, DE and has 2 papers in the IPPS combined proceedings. Ron received the Fellow Award at the annual conference in Cincinnati in 2016. He lives in Lancaster County, PA with his wife Bonnie.