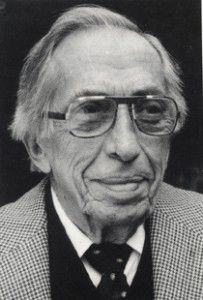 Dr. William Snyder was born on August 15th, 1914, in the city of Neosho, Missouri. He received his B.S. degree from the University of Colorado and his Masters and Ph.D. from the University of Chicago. He served in the military service from 1942 to 1946, after which he obtained a position at Cornell University, Ithaca, New York, as Assistant Professor of Ornamental Horticulture. He worked there 3 years earning an Associate Professorship before leaving.

In 1955 William Snyder went to Rutgers University and was appointed Professor of Ornamental Horticulture where he continued in this capacity for the next 22 years until he retired. He also served as an advisor to graduate and undergraduate students, some of whom are in the IPPS today. It is said by some that he worked hard to get the Landscape Department of Rutgers accredited and recognized as one of the best in the country. His goal was to “have the most outstanding Horticulture department on the East Coast”.

His areas of research included the effects of growth regulators and environmental factors such as light, temperature, and moisture on the rooting of ornamental plant cuttings. The benefits of cooling leaf tissue during the rooting process were among his findings. Cornus florida was one of the subjects of his experiments.

During the years 1953 to 1986 William Snyder variously served as the editor of the Proceedings, as secretary/treasure, as Eastern Region President, and as International President. After retiring, he lived in Boulder Colorado until his death on December 21, 1988.

* A special thanks goes to Terri Poindexter for the research and information on William Snyder.