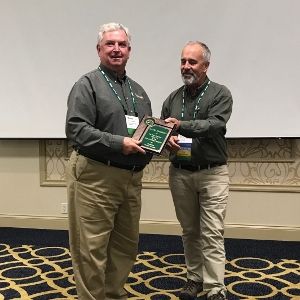 W. David Thompson (left with Recognition Chair Brian Maynard) has been named a Fellow of the IPPS Eastern Region.  David is  President of Foxborough Nursery in Street, Maryland.  The Fellow Award is presented to members who exhibit exemplary service to the Society and to the advancement of the field of propagation and production. The announcement was made on October 17, 2019 at the Annual Conference of the IPPS Eastern Region held in Madison, Wisconsin.

The IPPS Eastern Region honors it’s own once a year at the annual conference. Nominations of worthy candidates may be submitted at any time but in order to be considered for the 2020 balloting, nominations must be received by June 30, 2020. Contact Recognition Committee Chair Ron Strasko to make a nomination: ron@creekhillnursery.com